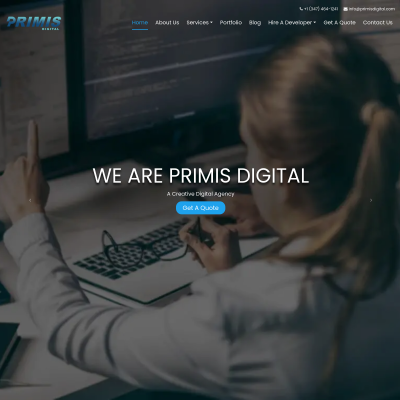 Primis Digital is the leading web development company in India and as the best web design company, we have expertise in various sectors of development. Connect Today!

PHP vs PYTHON: Battle to get Ahead in Web Development Race

The technical arena is filled with programming lan [...]

Now, if both of the languages are strongest in their domain, so why we need a clear-cut opinion about them, or what is the need to choose one?

We agree that for the time being, whether it is PHP or Python, both are the most popular server-side languages. And choosing one over the other has always been a tough call! But here comes the term "requirements", yes! It depends on the requirement of the business and the need of the hour that helps you decide which language would be suitable for your project.

According to Datanyze, PHP far exceeds the number of websites developed until Feb 2020. Still, this language, which at a point of time ruled the roost, is witnessing a downfall since its counterpart i.e., Python, has emerged as an alternative for web development.

So, you may think that if both the languages are shoulder to shoulder in the competition of availing better web development options, which one gets the final edge. Further, so must be wondering what is ‘web development’?

According to Wikipedia, "web development is the work involved in developing a website for the Internet (World Wide Web) or an Intranet (a private network)." So, whether you are surfing or developing a plain text page or a complex web app to aid your business or social network services, all of these and much more comes under the umbrella term web development.

Now, as web development seems to be a crucial facet to mark the presence of any business on the digital platform and help it to ace its competitors. But the selection of one language in this battle of Python over PHP solely can't be based on the growth rate; certainly, there are other reasons which a business or a developer should look after before making a decision; well, not to worry if that sounds a bit confusing to you, Biz4Group will undoubtedly help you chose one as per your business needs, and as we say, first thing first, let's get familiar with the two terminologies in hand;

The three Letters : 'P H P' and are they more than that?

PHP has a recursive acronym i.e., it is expanded as 'Hypertext Preprocessor'. It is a general "server-side" scripting language used in web development. Well, that said, PHP is much more than that; it is largely responsible for creating the dynamism on the websites in terms of webpages, content, or images.

PHP can also be used with Relational Database Management Systems (RDBMS), which can be deployed on most of the web servers and operating systems. PHP comes bundled in the most widely used LAMP architecture; here, it is commonly signified by 'P'. As posted by Andy Ide on Netcraft, as of January 2013, more than 240 million websites were using PHP, and it was installed on 2.1 million web-servers.

Well, that was a brief intro of PHP, now let's get familiar with its counterpart; i.e.

Technically, Python is an object-oriented, high-level programming language that has dynamic semantics to primarily aid for web and mobile app development. It is most likely used by those segments of developers who are in the field of Rapid Application Development as it supports dynamic typing and binding options.

You can't take lightly a language which is backing a stock exchange system, yes! You heard it right; the web-oriented transaction system of the New York Stock Exchange (NYSE) is powered by Python. Apart from being just a scripting language, it is widely used to solve scientific equations, save data, process text, images or display numbers, and much more. Well, apart from that, Django and Flask are the popularly used Python frameworks used to create web applications.

Well, those were a brief description of both the languages we are going to deal with, so let's put them into the arena and see who wins the battle of;

The installation process of PHP is pretty much simple as compared to Python. It can be easily installed and run on windows, mac, and Linux operating systems from a variety of options available by the hosting sites.

Whereas installing Python can be a little tedious at first due to various packages, because of which it takes a bit more time on installation.

For any programmer or developer, language is the most important factor to start with. They keep in mind that easier the language would be, the much easier it would be their task to handle else more complex language may take a lot of time in understanding and having the grasp of syntax only.

Python is a general-purpose programming language that can be learned quickly, even for a novice programmer. The python code and its syntax are so simple to use and easy-to-write that most of the programmers prefer it as their first choice to develop any application.

On the other hand, PHP was designed to create simple pages, but lately, a lot of complexities have grown for developers to continue with it. The PHP community is surely providing all sorts of help for the programmers, but as said, syntaxes and constructs of Python are much easier to be understood.

Cyblance have complete control over the look and f [...]

At Cyblance, we offer mobile-friendly wix website design so you never miss a potential customer to your website. Mobile is changing the world. Now everyone has smartphones with them, constantly communicating and looking for information. In many countries, the number of smartphones has surpassed the number of personal computers; having a mobile-friendly website has become a critical part of having an online presence. 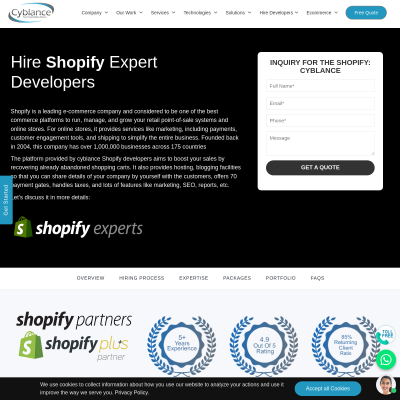 When you hire Shopify web developers from Cyblance [...]

Shopify is a leading e-commerce company and considered to be one of the best commerce platforms to run, manage, and grow your retail point-of-sale systems and online stores. For online stores, it provides services like marketing, including payments, customer engagement tools, and shipping to simplify the entire business. Founded back in 2004, this company has over 1,000,000 businesses across 175 countries

The platform provided by cyblance Shopify developers aims to boost your sales by recovering already abandoned shopping carts. It also provides hosting, blogging facilities so that you can share details of your company by yourself with the customers, offers 70 payment gates, handles taxes, and lots of features like marketing, SEO, reports, etc.

Let’s discuss it in more details:

Part 1: What is Accessibility and Why Inclusiveness is Our Moral Obligation?

While building digital products our teams focus on user-friendly flow, attractive visuals, and performance. Accessibility is overlooked in most of these scenarios and final product suffer from bad usability issues or no usability at all in some case for visually impaired people.

Accessibility in design allows people with diverse abilities to access, understand and perform the desired action with digital products. Improving the accessibility of product enhances the usability of the interface for people with low vision, blindness, hearing impairments, cognitive impairments, motor impairments, and all other users. It not only improves the usability of products for people with disability but makes a product much easier to use for the rest of all users. People with disabilities use assistive technologies, like screen readers, braille and assistive keyboards for navigating websites and applications.

Accessibility is for Inclusiveness

Often it is mistaken by product teams, design accessibility is only for visually impaired people, that is a half-truth. There are designs with bad usability, they suffer accessibility issues even when used by people with no disability. Imagine a digital interface, where reading is difficult because of low contrast or small type size. Now think how difficult would it be to read the same copy for people with weak eyesight. 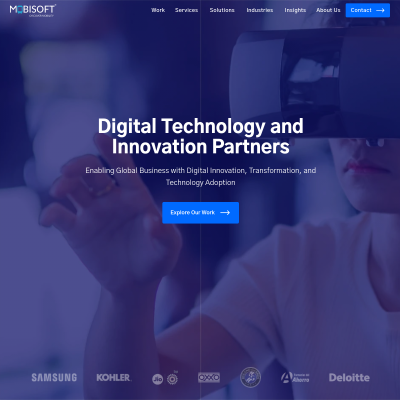 Mobisoft Infotech is Houston based smartphone application development company specialize in iOS, Android and BB Enterprise mobility service and our portfolio comprises of more than 240+ applications delivered so far. Our team has great experience in Mobile Application Development along with creative and Market specific product development. It comprised of highest caliber software designers and developers versed in development standards, best practice methods and most popular as well as cutting edge development platforms and technologies. 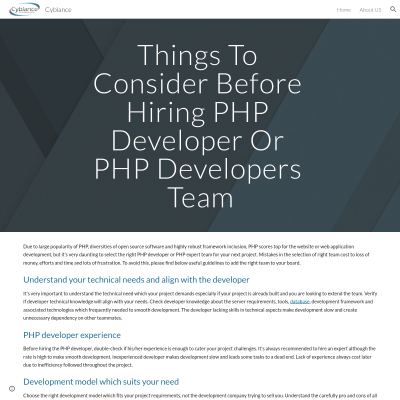 PHP is merely server-side scripting language. It i [...]

The Ontwikkeling website Gent becomes easy with the experienced site developers such as Expertmedia.be.

The Best Importance of Having a Responsive Web Design

If you are looking for responsive web design servi [...]

When you're looking for the best full-service prin [...]

When you're looking for the best full-service printing company in Santa Fe, hunt no further. Get professionally printed business cards that establish and reinforce your business identity.

Get a beautiful website that ranks well in search engines and delivers results. 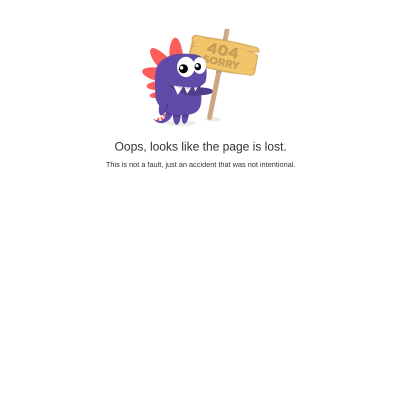 ICSS INDIA is a Cyber Security Training and penetration testing Company in New Delhi, India. We have been delivering advanced IT security training and services with upgraded technology contents to IT Professionals. Our goal is to sustain performance level producing efficient results. We Stand Up to our commitments which are committed by Our Team.

ICSS is known IT Company supporting Advanced IT Security Training, Android Development, Website Development, Programming Languages, and Physical Security. We are working for 10 years in this arena.

WHAT WE TRY TO GIVE

We try to give you real industry standards with the best possible quality to all our customers and clients. We focus on various sections of Society and running a national level campaign to literate Students from all parts of the company who can’t Afford “Basic IT Computer Training”. We wish we could reach as many students from all over the world and make it a beautiful place to work. We work on minimum gross margins to strength the Indian It infrastructure.