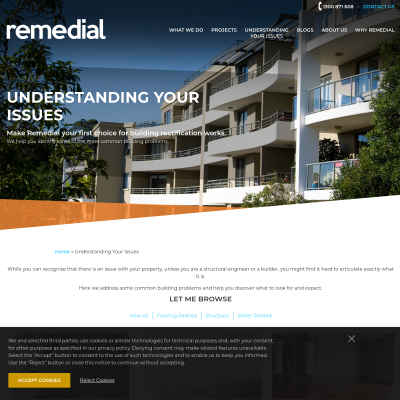 We know that not everyone understands the building [...]

Go
UNDERSTANDING YOUR ISSUES
While you can recognise that there is an issue with your property, unless you are a structural engineer or a builder, you might find it hard to articulate exactly what it is.
To help we have simplified some of the more common building problems and provided examples of what you should look for. 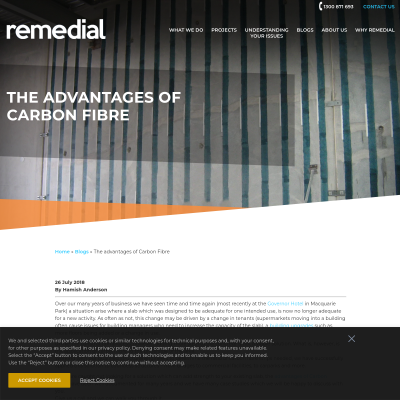 If you are caught out looking for a solution which [...]

THE ADVANTAGES OF CARBON FIBRE

Over our many years of business we have seen time and time again (most recently at the Governor Hotel in Macquarie Park) a situation arise where a slab which was designed to be adequate for one intended use, is now no longer adequate for a new activity. As often as not, this change may be driven by a change in tenants (supermarkets moving into a building often cause issues for building managers who need to increase the capacity of the slab), a building upgrade such as more floors being added or a change in use.
Unlike the construction process, however, adding more steel to the concrete is not a viable solution. What is however, is the application of carbon fibre to the underside of the area.
Working with our qualified structural engineers to determine the ratio of carbon fibre strips needed, we have successfully applied this solution to countless structures - from bridges, to commercial facilities, to carparks and more.
If you are caught out looking for a solution which can add strength to your existing slab, the advantages of Carbon Fibre have been well documented for many years and we have many case studies which we will be happy to discuss with you.
Give us a call and we can walk you through it.

This blog was posted in Carbon fibre, Commercial, Structural repair 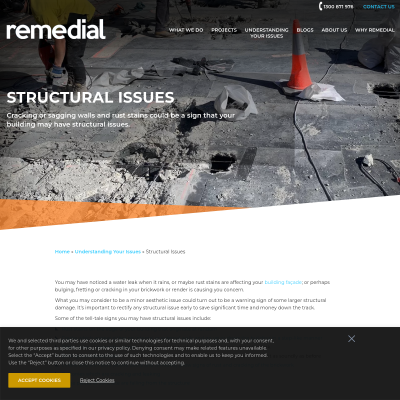 We know that not everyone understands the building [...]

SIGNS YOU HAVE A STRUCTURAL DEFECT IN YOUR BUILDING

So you have a water leak that is a pain when it rains, or maybe you have rust stains on the façade of your building that look ugly, or maybe it is brickwork or render that is bulging, fretting or cracking. What you may consider to be a minor inconvenience could actually be a warning sign that you have a larger structural issue in your structure.

Rectifying the issue early has been proven to save money as the issue is not as widespread as it will develop to be. This is because once a structure has a leak, or concrete cancer, more water will reach the affected (and other) area causing more rusting, displacement of concrete and cracking.

Some of the tell-tale signs you have structural issues include:

Whether it is due to the age of your building, exposure to the elements or poor workmanship and materials during construction, there are a number of factors which could be the cause of your structural problems. Many of the common issues which lead to large problems include:

WHY YOU SHOULD TACKLE STRUCTURAL ISSUES EARLY

Whether the issue is caused by water leak, age or construction flaw, the base fact is, what was or is a small problem may develop into a larger underlying issue which affects the structural integrity of your building. The earlier you take steps to the correct the latent issue – not just treat the obvious signs – the less advanced the issue becomes.

Many people often think that patching the issue will solve it, but once rust has started to affect steel, it will continue to expand, leading to further fracturing and ongoing issues. The issue will also continue to affect new areas, whether it is more areas starting to rust, or worsening leaks. Ideally, as soon as you notice an area with an issue as described above, you should call us in to investigate the issue and advise how wide-spread or otherwise it really is. Doing so could save you tens of thousands of dollars into the future and rectification works which are finished much faster.

If you have concerns about your structure, contact us today. 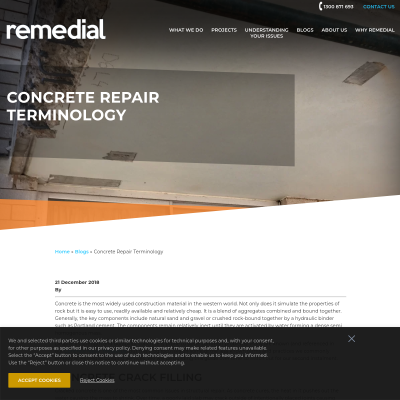 Concrete repair and building in general can be a c [...]

Go
Concrete is the most widely used construction material in the western world. Not only does it simulate the properties of rock but it is easy to use, readily available and relatively cheap. It is a blend of aggregates combined and bound together. Generally, the key components include natural sand and gravel or crushed rock bound together by a hydraulic binder such as Portland cement. The components remain relatively inert until they are activated by water forming a dense semi homogenous mass. 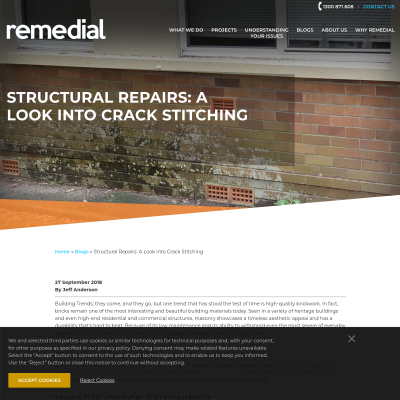 Despite being widely used, Bricks are not perfect. [...]

Go
Building Trends; they come, and they go, but one trend that has stood the test of time is high quality brickwork. In fact, bricks remain one of the most interesting and beautiful building materials today. Seen in a variety of heritage buildings and even high-end residential and commercial structures, masonry showcases a timeless aesthetic appeal and has durability that’s hard to beat. Because of its low maintenance and its ability to withstand even the most severe of everyday weather, brick continues to be a clear choice of property managers and building owners. 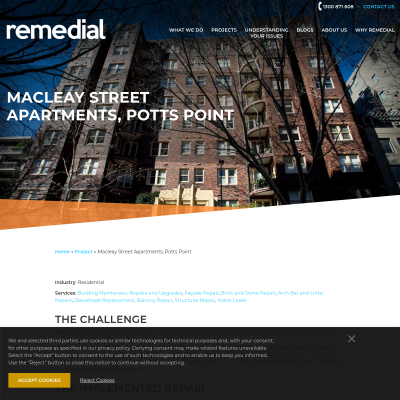 Located at the top of Potts Point, this majestic b [...]

With sweeping views of the Pacific Ocean, Potts point and the Sydney CBD, the Macleay Regis apartments are quite the prestiguous address. With architecture representative of a bygone era we were presented with the task of not only repairing the underlying structural issues plaguing the building, but with the requirement of ensuring that all works undertaken were done in such a way as to maintain the aesthetic character of the facade of the apartment building. 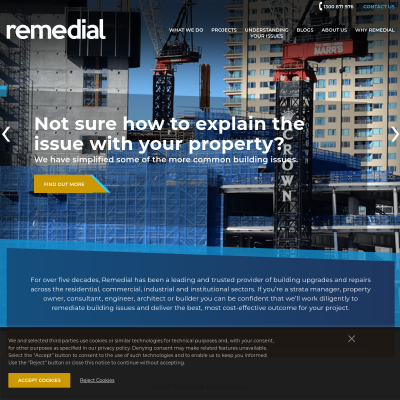 Home warranty insurance protects residential building owners in cases where there has been defective workmanship during the construction of the building. When a claim is filed by a policy holder, the insurer will provide a high quality contractor to rectify the building’s defects. Remedial works collaboratively with the insurance provider as well as a consulting engineer or building consultant to carry out rectification works with minimal fuss. We pay strict attention to every last detail to ensure that both building owners and insurers are completely satisfied with the end result of the rectification works.Our services encompass both structural and aesthetic issues, including common claims such as faulty waterproofing, defective window installation, structural issues and concrete spalling. 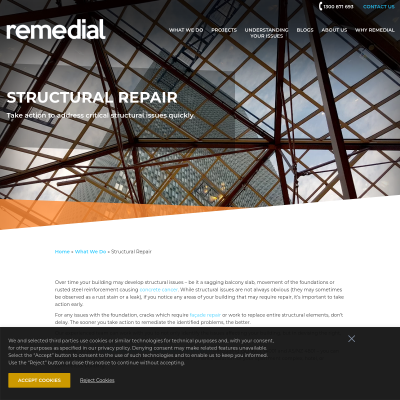 Over time it is inevitable that your building structure will develop structural issues – be it a sagging balcony slab, movement of the foundations or rusted steel reinforcement causing concrete cancer, the sooner you take actions to remediate the identified problems, the better.

With over 45 years’ experience and with independent certification – including ISO 9001, 14001 and AS/NZ 4801 – you can be assured of quality workmanship and a specialised maintenance solution for your apartment complex, hotel, or commercial building. Furthermore, we have successfully applied structural solutions to a number of high profile Heritage Listed Buildings such as the Department of Education Building in Sydney, The Myer Building in Brisbane and the YHA complex in Sydney.

Over time it is inevitable that your building structure will develop structural issues – be it a sagging balcony slab, movement of the foundations or rusted steel reinforcement causing concrete cancer, the sooner you take actions to remediate the identified problems, the better.

With over 45 years’ experience and with independent certification – including ISO 9001, 14001 and AS/NZ 4801 – you can be assured of quality workmanship and a specialised maintenance solution for your apartment complex, hotel, or commercial building. Furthermore, we have successfully applied structural solutions to a number of high profile Heritage Listed Buildings such as the Department of Education Building in Sydney, The Myer Building in Brisbane and the YHA complex in Sydney.

This is a building owner’s definitive guide on gen [...]

Go
Not all buildings are the same and thus, no two “repair jobs” are the same. Sometimes a simple piece of handyman work will suffice, other times, there is need for structural repair. What we want to do, is help you distinguish between structural repair and general repair as the two terms are not interchangeable really.And we write it to serve as a guide for owners and building managers to identify when to call for general repairs and which building conditions are deemed appropriate to call in structural repair specialists – like Remedial Building Services.If you are interested in learning more, then this article is for you. 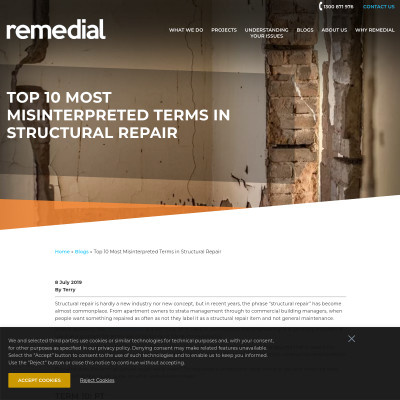 Remedial has compiled the ten most common terms th [...]

Structural repair is hardly a new industry nor new concept, but in recent years, the phrase “structural repair” has become almost commonplace. From apartment owners, to strata management through to commercial building managers, when people want something repaired as often as not they label it as a structural repair item and not general maintenance.Strictly speaking, structural repair is a technical term used in construction and engineering. It is generally incorrect to use it as a synonym for terms like renovations or home improvements. However, due to the fact this activity involves repairs of all sorts, people almost immediately assume that it means the same thing. It is, after all, making changes to a building, apartment, or any property to align its construction and condition to existing health and safety standards.But what does the term structural repair really cover? To help people understand what terms to use and when, we have put together this rough guide on what various terms mean.