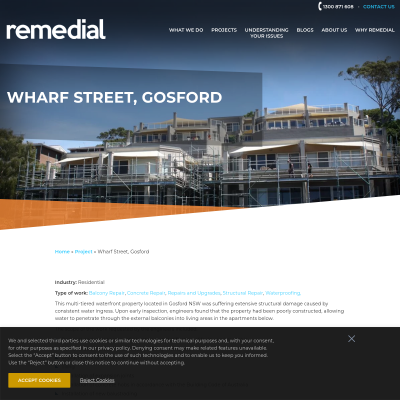 This multi-tiered waterfront property located in Gosford NSW was suffering extensive structural damage caused by consistent water ingress. Upon early inspection, engineers found that the property had been poorly constructed, allowing water to penetrate through the external balconies into living areas in the apartments below.

The scope of the work requested by the engineers included:

Remedial commenced the project in early 2015 after tendering a methodology for undertaking the project. Before beginning the works, Remedial erected scaffolding at the rear of the property to minimise the impact on residents.

The first stage of the project involved the removal of the old balustrades, balcony tiles and membranes. Once this was completed, the team began the removal of the apartment windows and glass door assemblies, before installing a torch-on waterproofing membrane system. A flashing was then placed in the appropriate position before reinstalling the door and windows. This procedure was performed on each apartment one-by-one, in order to reduce the impact on residents by ensuring that each home was exposed to the elements for the minimum possible time.

During the next stages of the project, cavity flashings were installed, a torch-on membrane was applied to the surface of each balcony and screeds were applied where necessary. Once this was complete,the legs for the new glass and aluminium balustrades were positioned, new tiles were installedand a suitable expansion jointing system was applied to allow adequate movement of the joints.

The final stage of the project involved the coating of various elements and the installation of the balustrade frames and glass. After the completion of all rectification works, the building was commercially cleaned prior to the final inspection by the engineers. As soon as the completion certificate was issued, the scaffolding was removed.

For the Wharf Street rectification project, the measures taken included but were not limited to: 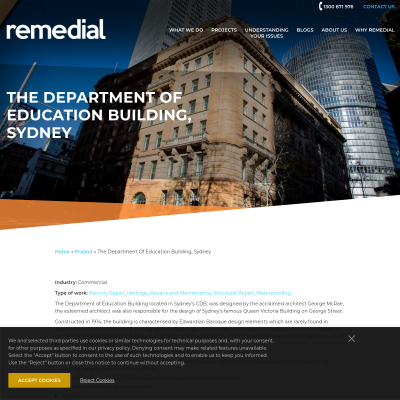 THE DEPARTMENT OF EDUCATION BUILDING, SYDNEY

The Department of Education Building located in Sydney’s CDB, was designed by the acclaimed architect George McRae, the esteemed architect was also responsible for the design of Sydney’s famous Queen Victoria Building on George Street.

Constructed in 1914, the building is characterised by Edwardian Baroque design elements which are rarely found in Australian architecture. Almost a century after the building’s construction, Remedial Building Services were engaged to perform restoration works to this beautiful building for the purposes of ensuring that water damage and ingress could be prevented into the future.
All told, the work we were brought on to address included:

Rectification on this extensive project began on the rooftop of the building, where qualified asbestos removal staff began the process of isolating the area to be worked on, encapsulating it and then removing the faulty membrane containing bonded asbestos.
During this stage of the rectification, Remedial worked with building management to implement extensive measures to protect employees and the general public from any exposure to asbestos particles. Once all asbestos affected materials had been safely disposed of, the Remedial team installed a new torch-on membrane to the roof and parapet in order to prevent the ingress of water into the building.

After the roof was completed, specialist staff with extensive heritage rectification experience repaired and replaced all copper flashings and window beading.

This rectification project was completed over a 16 month period to the satisfaction of the building management, with minimal if any impact on the occupants of the building. The high quality work provided by Remedial enhanced the waterproofing and structural integrity of the building while maintaining all the requirements of a heritage listed building.
These works will allow the building to remain structurally sound and visually spectacular for many years to come. 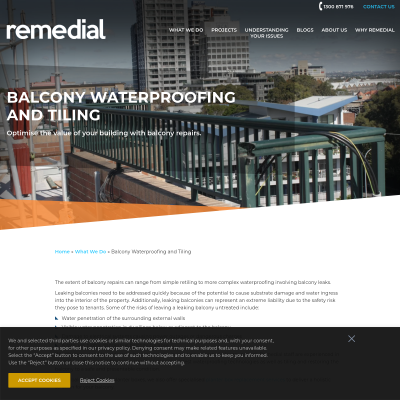 Whether it is undertaken in isolation or part of a [...]

THE IMPORTANCE OF BALCONY REPAIR

Whether it is undertaken in isolation or part of a larger project, balcony repairs may range from a relatively simple retiling, to a more complex waterproofing project designed to rectify a leaking balcony.

Leaking balconies are both relatively common and extremely serious because of their potential to cause substrate damage and water ingress into the interior of the property. Additionally, leaking balconies can represent an extreme liability due to the safety risk they pose to tenants. Some of the risks of leaving a leaking balcony untreated include:

Remedial staff are experienced in identifying the origin of all leaks, implementing the latest waterproofing technologies,and finally restoring the balcony to a safe and presentable condition. If your balcony contains planter boxes, we also offer specialised planter box replacement services to deliver a holistic solution for your balcony. 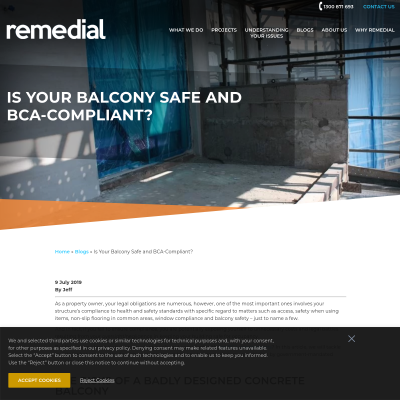 Is Your Balcony Safe and BCA-Compliant? | Remedial Building Services

Whilst less reported, incidents of falling have be [...]

Go
As a property owner, your legal obligations are numerous, however, one of the most important ones involves your structure's compliance to health and safety standards with specific regard to matters such as access, safety when using items, non-slip flooring in common areas, window compliance and balcony safety – just to name a few.  And in fact, if you fail to ensure compliance, you are potentially exposing yourself to unnecessary costs and legal battles resulting from your oversight/negligence in keeping your building safe for occupancy.But how do you know that your structure is safe and compliant with the BCA requirements? In this article, we will tackle in detail what you need to do with your apartment balcony to ensure that you are abiding by government-mandated regulations.